For the time being, this is the sixth and last instalment of my tutorial series on needleweaving. See my page all about needleweaving for links to the first 5 parts and related stuff.

One of the most beautiful aspects of needleweaving is that the warp doesn’t need to be straight. Here I show how to do a piece with circular warp, but it can go any direction. Also, the cardboard frame and therefore the shape of the finished piece can be any shape.

I have been using the same cardboard frame I used for my last piece. Here you see the circular warp anchored in the backstitches at the sides. 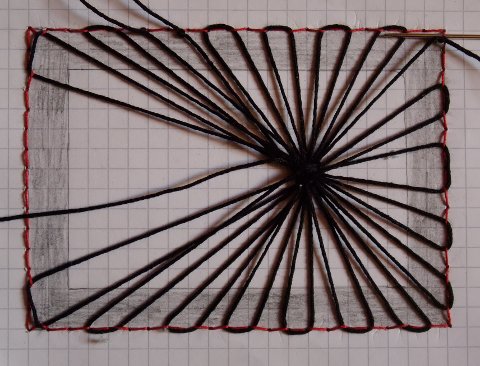 Fix the warp in place by weaving arround the middle a few times.

At the bottom of the piece, I added straight threads. They will act as warp, so the weft will go up and down not from right to left in this area. I wove those threads into the spiderweb. All layers should be interwoven so that the finished piece won’t fall apart.

Next I started weaving the black frame. You don’t need to do such a frame, I wanted it for the look. About one centimeter should be done in canvas binding arround the whole piece for stability, but this can be done using the normal working threads as well, especially when these borders will be hidden in the finished article. 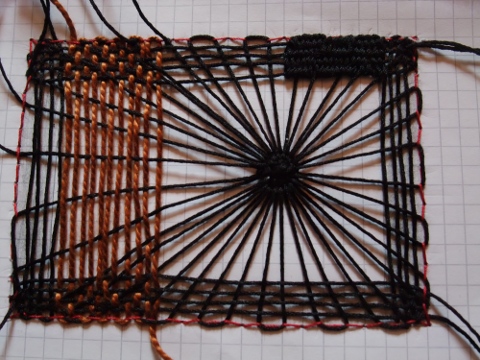 The middle of the spiderweb was not filled with circular weaving, I wove spokes which are meant to be sun rays. Note how some on them project into the border. The black border was woven at the same time in these places. 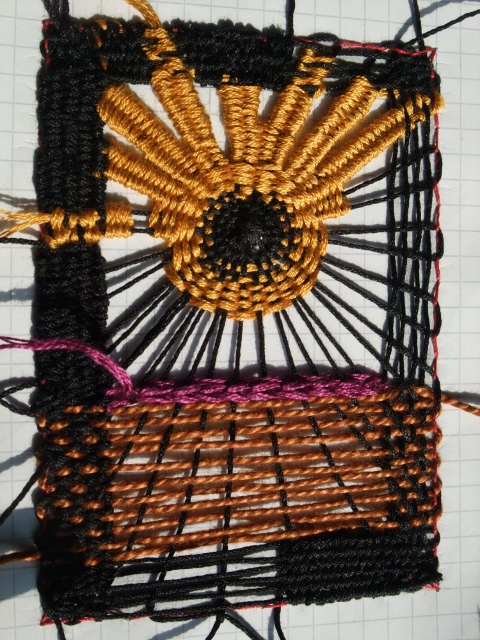 The finished Piece. Note the weaving direction in the part representing the ground. It goes up and down over the secondary warp in brown thread. The violet and yellow above the brown soil was woven to and fro into the warp coming from the spiderweel.

First, I want to show you another method of starting threads that I found in this tutorial. Split the tread in two parts for this if possible or use a thread you can use double. fasten it arround a warp thread with a slip knot.

Another remark: Diane suggested in a comment to ue plastc canvas as a loom, just anchor the warp threads in it and cut it away when you’re done. Thank you Diane, sounds like a good idea to me (or would, if plastic canvas was common here).

In my previous works woven on improvised looms you have probably seen many areas of different pattern side by side. Here I show how this is done as best as I know.

The first method is the slit weaving method. You simply turn where one colour ends and weave back and forth in the intended shape. The adjacent shapes are done the same way, so that slits form between colour areas. This is more difficult than it looks. If you pull the warp together just a little bit while weaving the slits will become ugly holes. Also, the pattern should be designed for this to avoid really long gaping slits.
The advantage of this is that the borders between colours are very clearcut. This is usually used in traditional Kelims.
In the piece I show, one side of the round whape is strictly slit weaving, on the other I cheated because the thing was slightly pulled out of shape. 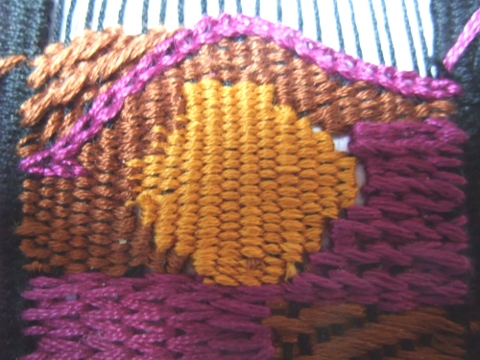 The next method is called dovetailing, and is imho the easiest and most versatile one. The two areas in different colours share one warp thread at the border. With a needle, you can weave one shape first and add the adjacent one as shown in the photograph. With a shuttle or something similar you will have to weave both shapes simultaneously, alternating between colours.
You can use this when the two threads are different in gauge, just weave arround the shared warp thread where it seems appropriate, not strictly after every thread of the first shape.

The next method is interlocking. With a needle, thread the the weft of one shape through the loop the weft of the other shape has formed when turning, you can pick up the warp thread either or not as it suits you. With shuttles, weave the two shapes simultaneously and wrap the two threads arround each other where they meet.
This will only work well when using same gauge thread and a similar weaving technique for both pieces, but then it can look more cleanly than dovetailing. 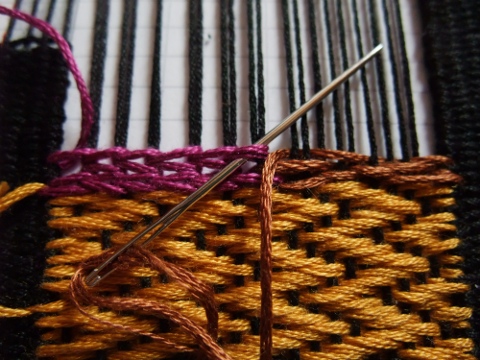 The last technique would be brocading, but i have never done this myself. In this technique, you use 2 or more differently coloured weft threads simultaneously and alternate between them leaving floats either on the backside or on the front side, comparable to fair isle knitting. This technique is suitable for conventional western looms and can be done by machines easiely. I’m not sure about the other techniques.

The other 3 techniques are mainly used in folk craft, for example slit weaving in oriental kelims, dovetailing or interlocking in Navajo rugs. These are usually done on vertical looms, without combs and heddles as we know them from conventional western looms, more often than not even without shuttles or needles.