A Bad Cold and Some Lace and Stones

Hey, I know this blogging break was longer than I said it would be. My vacation was fun and interesting but also hard on my body. In the end, I caught a really bad cold so I spend the last few days in bed, unable to do much. I’m still very tired, so I post some stuff I did before my vacation, but I will have sketches and photographs to show as soon as I feel up to sorting them.

Here is a look at what I did. yes the pics were taken on the train, the blue background are the train seats. I like rocky, uneven stones better than the smooth ones, so that’s what I tried to cover. I also crocheted a beaded chain with the vague intent to use a covered stone as pendant. I used ecru coloured Anchor crochet cotton 40 for it all.

The covered Stone. The crochet cotton lookes a bit rough on the little thing, I’ll have to get 60 or 80 when I can go out again. 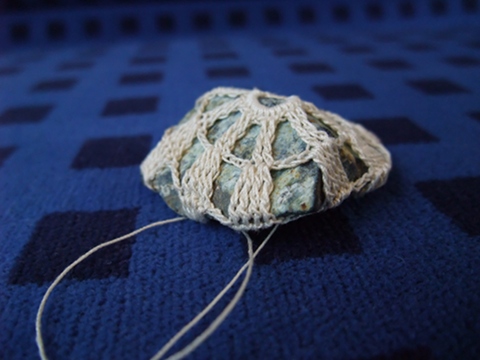 A closeup of the chain. Not the colours you would normally use for jewelry, but so nicely stoney.

The second stone to cover. It is in fact smaller than the first, and has nice structor of its own. I’ll definitely need cotton size 80 there. 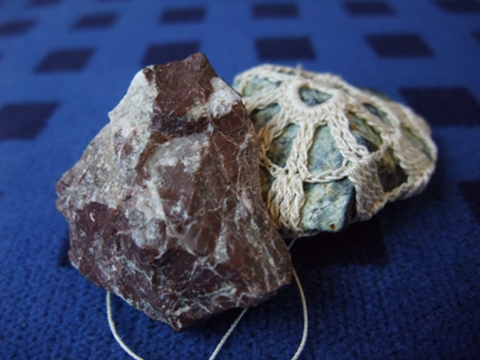 This entry was posted on Wednesday, August 25th, 2010 at 4:41 pm and tagged with beaded crochet, crochet and posted in crochet, life. You can follow any responses to this entry through the RSS 2.0 feed.
« Announcement: Blogging Break
Sketchcrawl of July »

One response to “A Bad Cold and Some Lace and Stones”