Im ealier Experimetnts I found this hot pink lutradur hard to melt with a flat iron. I had got it from a craft shop where it was sold for use as floristic ribbon.

In the first trial, I simply heatgunned a piece of it. It shrunk to about half the size and crumpled up nicely without becoming unreasonably stiff or brittle. It was not hard to make it lay flat or or maintain a regular form, This is roughly postcard sized now and will make a good background for something one day, For my taste it is still too thin to use without some kind of backing. This experiment definitely was a success. 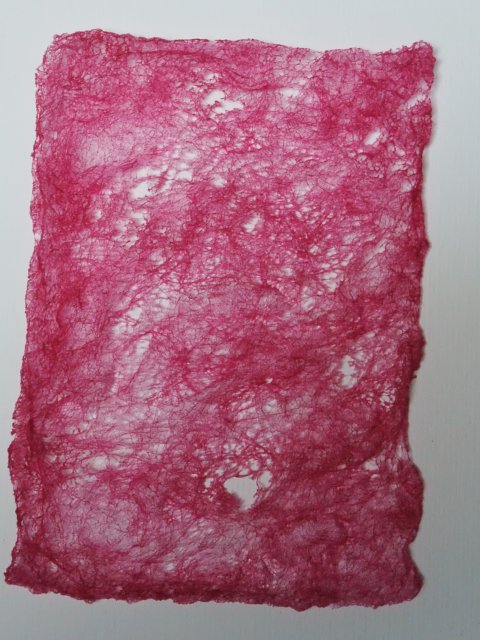 The next one was two sheets of the same lutadur, a layer of blue polyester organza trapped between them and the whole thing stitched together with polyester and cotton thread. The whole thing is much less beautiful than the first one, because it became too flat and opaque.
This one is perfectly flat and not brittle either. It is kinda stiff, just enough that it can be worked on further without a backing. Still, two sheets of heavier lutradur like this are probably too much.

This is a detail from the latter one. The section was stitched together with polyester thread (Gütermann buttonhole machine sewing thread). The tread shrunk together with the rest of the material without completely melting away.

The last picture shows a section that was stitched together with cotton (standard stranded embroidery thread). As you can see it wasn’t harmed by the temperatures needed to melt this, but of course it did not shrink so it sticks out weirdly now. This is a good effect if it is wanted, if not I’d rather use manmade thread.

This entry was posted on Sunday, October 19th, 2008 at 11:50 am and tagged with fiber art, heat gun and posted in heat gun, modern techniques. You can follow any responses to this entry through the RSS 2.0 feed.
« Details of last week’s melting project
This week’s heat gunning experiment »

One response to “Heatgunning Lutradur”