Now, the next two stitches would have been algerian eyelet and feather stitch. For both, i made plans, prepared backgrounds and collected materials. All this took way too long, so although i had caught up with the January stitches by now I was getting behind again and decided to do the current stitch, which was fly, and continue with those two later.

The most notable event of the fly stitch week was the caipirinha party a friend gave for her birthday, so it was going to be about that. For the background, I wanted to do some hand needlefelting on a batist background, using stuff from my thread leftover bag, and attach a bit of green jute band at the bottom. But the felting went like a lesson how not to needle felt, so it took more than 30 hours to do what you see and i got behind again. So, there’s not a single fly stitch on this one yet. 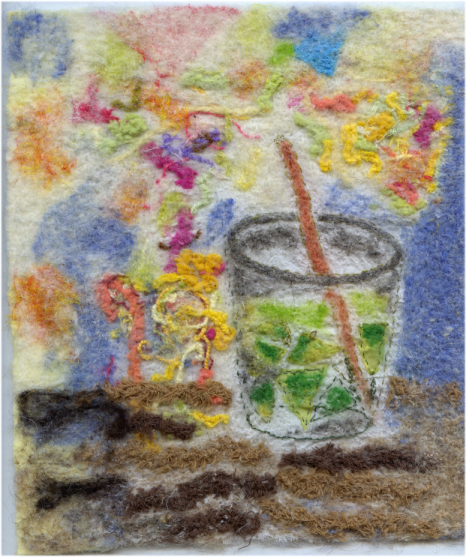 This entry was posted on Friday, April 6th, 2007 at 11:33 pm and posted in needlefelting, tast. You can follow any responses to this entry through the RSS 2.0 feed.
« TAST5 chevron stitch
TAST9 cross stitch »

3 responses to “fly stitch background, and other tast progress”